Northam is a fully empowered PGM producer. Historically disadvantaged South African (HDSA) ownership levels in the company are pegged at 31.4% following the conclusion of a R6.6 billion black economic empowerment (BEE) transaction, which included the successful raising of R4.6 billion. The transaction was approved in March 2015. In terms of the deal, Northam issued 112 195 122 new shares (equivalent to 22% of Northam’s issued share capital) to a special purpose BEE vehicle known as Zambezi Platinum (RF) Limited (Zambezi or Zambezi Platinum). These shares were supplemented by 47 710 331 shares (equivalent to 9.4% of Northam’s issued share capital), sold to Zambezi Platinum by the Public Investment Corporation SOC Limited (PIC).

Zambezi Platinum comprises a range of HDSA stakeholders including an employee trust, two community trusts, a women’s group and a core of strategic partners. Together they hold a 31.4% stake in Northam, with a 10-year lock-in period for the participants from May 2015. 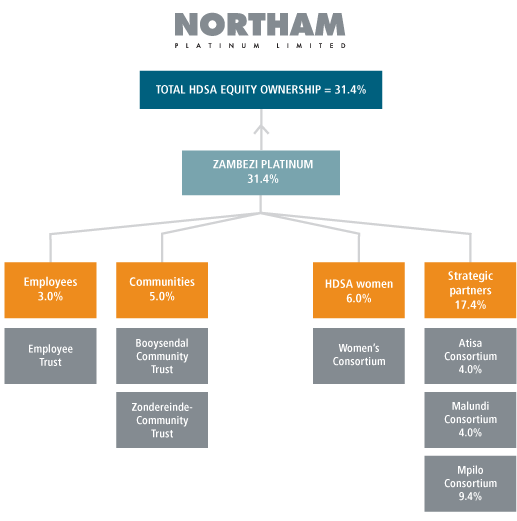 Joined the board in October 2014

Mr Dunne is the chief executive officer of Northam. Prior to joining Northam, he was employed by Impala Platinum Holdings Limited (Implats) as an executive director responsible for all mining, concentrating and smelting operations at Implats’ Rustenburg and Marula mines.

Joined the board in November 2018

Ms Coetzee is the chief financial officer of Northam. She has more than 10 years’ experience of and exposure to the mining and manufacturing industries which includes the auditing of large listed and multi-national companies for EY, where she was an associate director.

B Proc; LLB; diplomas in general nursing and midwifery

Joined the board in November 2017

Advocate Motseki-Zim is a director of Atisa Group Proprietary Limited, Zim Holdings Proprietary Limited and chairperson of Women Be Adorned, a women’s development non-profit organisation. She also has a 10% indirect interest in SMS, a contractor to Northam.

Joined the board in October 2014

Member of the social and ethics committee.

Mr Mseleku is the executive chairman of Sakhumnotho Group Holdings, and of the Oakhurst Insurance Company. He serves on the board of Sulzer Pumps SA Proprietary Limited, among other companies. He was the founder and immediate former president of the Pan African Chamber of Commerce and Industry. Mr Mseleku is a director of SMS and also has a 10% indirect interest in the company.

Chairman of the audit committee and the social and ethics committee.

Ms Mazwai is the founder and festival director of the BuyelEkhaya Pan African Cultural Festival. She has more than 20 years’ experience in senior management, consultancy and programme management roles.

Member of the audit committee.

Mr Smith is not a director of the company but a member of the social and ethics committee and is the executive: human resources for Northam. He has extensive experience in the mining sector and has held senior human resources positions at AngloGold Ashanti Limited, Richards Bay Coal Terminal Proprietary Limited and Impala Platinum Holdings Limited.

Member of the social and ethics committee.

Mr Nene has extensive experience in investment banking, advising on a number of significant merger and acquisition activities in the mining industry. After a tenure at BoE Merchant Bank, he moved to Shanduka Resources Proprietary Limited where he was part of the mining and marketing team.

He was instrumental in turning around and growing Shanduka’s coal mining investments and was actively involved in the management of the underlying investments.

Member of the audit committee.