First-time home owners from the Northam Platinum mine were thrilled today when the Limpopo provincial government in partnership with Northam Platinum handed over keys to their houses at Mojuteng, Thabazimbi in Waterberg District on Tuesday 14 November 2006. 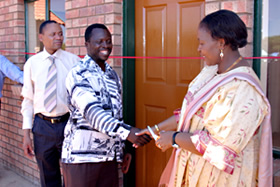 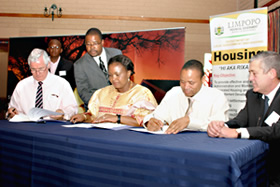 BHP Billiton, the world’s largest diversified resources company, through its development trust and Northam Platinum have joined forces to renovate a primary school in the Limpopo province, known as the Chrome Mine Primary School.


BHP Billiton, the world’s largest diversified resources company, through its development trust and Northam Platinum have joined forces to renovate a primary school in the Limpopo province, known as the Chrome Mine Primary School.

The two companies spent R500 000 to renovate the administration block, classrooms, a computer room and ablutions facilities. The project forms part of BHP Billiton’s Zwartkop Chrome mine’s R9.6 million closure and community rehabilitation programme. Northam, which draws some 25% of its employees from the Limpopo Province, has been involved in upliftment projects in the area for a number of years, and has previously established a clinic in the village in an effort to make health care more accessible. 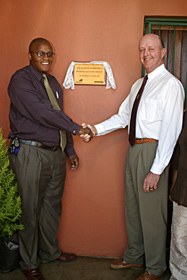 “Our ongoing development work with the community has seen the completion of a successful ground water development project; school refurbishment; and the provision of teaching aids for a couple other schools in the area, including mini libraries and a mini laboratory,” says Syd Absolom, VP of mineral resources, Stainless Steel Materials at BHP Billiton. “Most importantly, we have focused on whole school development, paving the way for skills development for teachers, student leaders, and school governing bodies. We have also worked with the community and the local high school to introduce a Matric enhancement programme. Local labour was used in the rehabilitation. The greater school development programme, which included another site, was conducted by a BEE company from outside the region.”

Matthews Nzimande, GM of Northam, says: “It is important that we do not lose sight of our responsibilities to the communities in which we operate. This project is an excellent example of what can be achieved in remote communities when businesses work together and in partnership with the authorities, and where joint involvement can really add the critical mass in delivering sustainable and value-adding social upliftment.”

The project was completed in consultation with the communities of the farms Schilpadsnest, Vlakpoort, and Zwartkop, on which the mine was situated.

BBDT implements, co-ordinates and manages the sustainable development initiatives of BHP Billiton and BHP Billiton companies and operations including Samancor Manganese, Ingwe Coal and BHP Billiton Aluminium, which participate in the trust. BHP Billiton allocates 1% of pre-tax profits to corporate responsibility projects, based on a three-year rolling average. Expenditure on projects for the year ended 30 June 2006 is valued at over R65 million. The funds are applied in four main categories: education and training, capacity building, socio-economic development and healthcare. 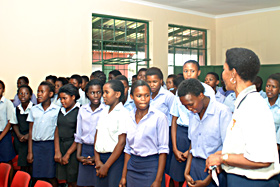 The school project forms the social responsibility part of the regional rehabilitation project, which has also resulted in the re-establishment of sustainable land use over an area of 600 hectares. It is now estimated that ongoing use of the area will generate R3 million worth of economic benefit over the next 20 years, while the land itself is valued at almost R1 million. After the mine was closed, ownership of the land was restored to the local community following a 2003 land claims court action that was unopposed by BHP Billiton. The resources company made access to the site – and its rehabilitation – a condition of the restitution, and concluded a rehabilitation agreement with the Baphalane Community.

In the year ended 30 June 2006, BHP Billiton generated turnover of US$39.1 billion, and attributable profit of US$10.2 billion.

BHP Billiton is dual listed on both the Australian and London stock exchanges, with headquarters in Melbourne, Australia. It has secondary listings on the Johannesburg Stock Exchange and the New York Stock Exchange (through ADRs).

Further information on BHP Billiton can be found on our Internet site: www.bhpbilliton.com

Northam Platinum Limited, a broadly based black empowerment company, wholly owns and operates the Northam Platinum mine near Thabazimbi in the Limpopo Province. Northam’s corporate social investment initiatives are aligned with the Integrated Development Plans of the local municipalities. These initiatives are focused on setting a foundation for economic growth in the area.

Over a number of years Northam has developed constructive and supportive relationships with targeted schools in the area, allocating time, funding and resources to upgrade educational facilities.

For further information on Northam Platinum, visit the website at www.northam.co.za

At the operating level steady progress has continued, with a 25% increase in development metres, the successful negotiation through the 20 line fissure on four levels, capital development to access 1 level, and the deepening project to 14 level. Overall tonnages milled were 7% higher year on year reaching more than 2.3 million tonnes. Good grade control was maintained, with an average combined head grade of 5.5 g/t recorded over the year, resulting in Northam’s best ever production levels of 361 399 oz.

Commenting on costs, chief executive Glyn Lewis said that the increased volumes had had a beneficial impact on containing operating costs: “Unit cash costs were 0.5% lower year on year; at the rand per tonne level good cost control is also evidenced by an increase of only 3.3%.”

Northam continues to be highly cash generative, with healthy cash reserves of R831 million at the end of the reporting period.

Profit attributable to shareholders climbed sharply to R703 million, up 183% year on year. In line with Northam’s track record of returning cash to shareholders, a final dividend of 165 cps has been declared, bringing the total dividend for the year to 280 cps.

The Magistrate in the joint inquest and inquiry into the conveyor belt fire which occurred on 20 September 2004 at the Northam Platinum mine handed down his finding today.


The Magistrate in the joint inquest and inquiry into the conveyor belt fire which occurred on 20 September 2004 at the Northam Platinum mine handed down his finding today. In terms thereof it was found that negligence could not be excluded on the part of the mine. Northam does not accept the finding which is incorrect in various respects.

Although there is no indication that prosecution will necessarily follow, in the event that it does, Northam will strongly oppose it.

The expected increase in earnings results from a combination of a substantial rise in the average Rand receipts for the company’s basket of metals and higher sales volumes relative to the previous comparable period.

The forecast earnings information contained in this trading update has not been reviewed or reported on by the company’s auditors.

It is anticipated that the preliminary results for the year ended 30 June 2006 will be released on or about 3 August 2006.

It is with deep regret and sadness that Northam records the death on 4 June 2006 of Mr Eric Molobi, who was a director of the company for nearly six years.


It is with deep regret and sadness that Northam records the death on 4 June 2006 of Mr Eric Molobi, who was a director of the company for nearly six years. His wise counsel, astute leadership and positive contribution to the affairs of the company will be sorely missed. The company extends its deepest sympathy and sincere condolences to his wife and family.

It is with deep regret that Northam Platinum Limited advises the death of three employees following an explosion in a mining-related accident.


Johannesburg, 20 February 2006. It is with deep regret that Northam Platinum Limited advises the death of three employees following an explosion in a mining-related accident underground at its mine in the Thabazimbi area in the Limpopo Province.

The incident occurred at approximately 14:00 today, Monday 20 February 2006 at a depth of some 1,600 metres underground.

Management is currently engaging with the DME and the unions in launching an investigation into the cause of the incident.

No other employees sustained any injuries. The names of the deceased are being withheld until their next of kin have been advised.


First half performance underpinned by higher output and metal prices

Milled tonnages in the period were 20.5% higher at 1.2 million tonnes, while the combined head grade remained largely unchanged at 5.5 g/t (3PGE + Au). A total of 219 159m2 were mined, 19.4% higher year on year. Some success was achieved in traversing the 20 line fissure fault on the western side of the mine, on 3, 5 and 8 levels, contributing to the 49.7% improvement in development metres to 7 210m, and providing some mining flexibility. The Merensky ore reserve is at 19 months’ availability and UG2 at 28 months.

The erratic nature of the Merensky reef combined with the fewer number of working shifts available in the second half of the financial year will give rise to lower metal production and sales. Consequently, should the average Rand basket price received for the second half be in line with currently prevailing prices, a moderate decline in earnings will result.

The expected increase in earnings results from a combination of a substantial increase in the average Rand receipts for the company’s basket of metals and higher sales volumes relative to the previous comparable period which were adversely affected by an interruption to production.

The forecast earnings have not been reviewed by the company’s auditors.

It is anticipated that the interim results for the six months ended 31 December 2005 will be released on or about 2 February 2006.